Situated on the site of the former Citadel, it was built by King Norodom in 1866 on the banks of the Mekong River. Inside its gleaming yellow walls are the Throne Hall; the Chan Chaya Pavilion, specially made for performances of classical Cambodian dance; the Napoleon III Pavilion, offered to King Norodom by Queen Eugenie, wife of Napoleon III, and the King's and Queen's residential quarters. Nowadays, only the Silver Pagoda can be visited.

History of The Royal Palace

The establishment of the Royal Palace at Phnom Penh in 1866 is a comparatively recent event in the history of the Khmer and Cambodia. The seat of Khmer power in the region rested at or near Angkor north of the Great Tonle Sap Lake from 802 AD until the early 15th century. After the Khmer court moved from Angkor in the 15th century after destroyed by Siam, it first settled in Phnom Penh which back then named as Krong Chatomok Serei Mongkol in 1434 (or 1446) and stayed for some decades, but by 1494 had moved on to Basan, and later Longvek and then Oudong.The capital did not return to Phnom Penh until the 19th century and there is no record or remnants of any Royal Palace in Phnom Penh prior to the 19th century. In 1813, King Ang Chan (1796–1834) constructed Banteay Kev (the 'Crystal Citadel') on the site of the current Royal Palace and stayed there very briefly before moving to Oudong. Banteay Kev was burned in 1834 when the retreating Siamese army razed Phnom Penh. It was not until after the implementation of the French Protectorate in Cambodia in 1863 that the capital was moved from Oudong to Phnom Penh, and the current Royal

Palace was founded and constructed.

At the time that King Norodom (1860–1904) signed the Treaty of Protection with France in 1863, the capital of Cambodia resided at Oudong, about 45 kilometers northeast of Phnom Penh. Earlier in 1863 a temporary wooden Palace was constructed a bit north of the current Palace site in Phnom Penh. The first Royal Palace to be built at the present location was designed by architect Neak Okhna Tepnimith Mak and constructed by the French Protectorate in 1866. That same year, King Norodom moved the Royal court from Oudong to the new Royal Palace in Phnom Penh and the city became the official capital of Cambodia the following year. Over the next decade several buildings and houses were added, many of which have since been demolished and replaced, including an early Chanchhaya Pavilion and Throne Hall (1870). The Royal court was installed permanently at the new Royal Palace in 1871 and the walls surrounding the grounds were raised in 1873. Many of the buildings of the Royal Palace, particularly of this period, were constructed using traditional Khmer architectural and artistic style but also incorporating significant European features and design as well. One of the most unique surviving structures from this period is the Napoleon iron Pavilion which was a gift from France in 1876, (it is now closed to the public because of its poor state of conservation).

King Sisowath (1904–1927) made several major contributions to the current Royal Palace, adding the Phochani Hall in 1907 (inaugurated in 1912), and from 1913-1919 demolishing several old buildings, and replacing and expanding the old Chanchhaya Pavilion and the Throne Hall with the current structures. These buildings employ traditional Khmer artistic style and Angkorian inspired design, particularly in the Throne Hall, though some European elements remain. The next major construction came in the 1930s under King Monivong with the addition of the Royal Chapel, Vihear Suor (1930), and the demolition and replacement of the old Royal residence with the Khemarin Palace (1931), which serves as the Royal residence to this day. The only other significant additions since have been the 1956 addition of the Villa Kantha Bopha to accommodate foreign guests and the 1953 construction of the Damnak Chan originally installed to house the High Council of the Throne. 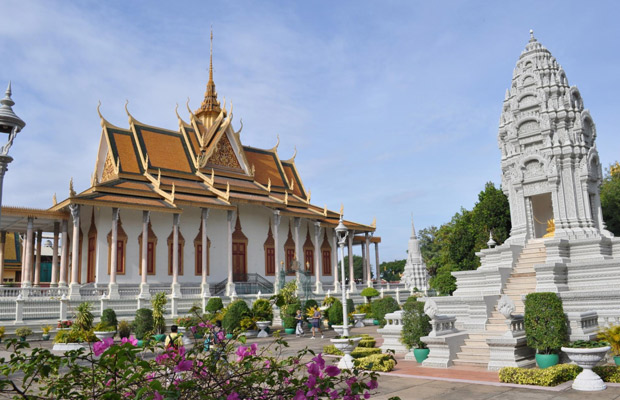 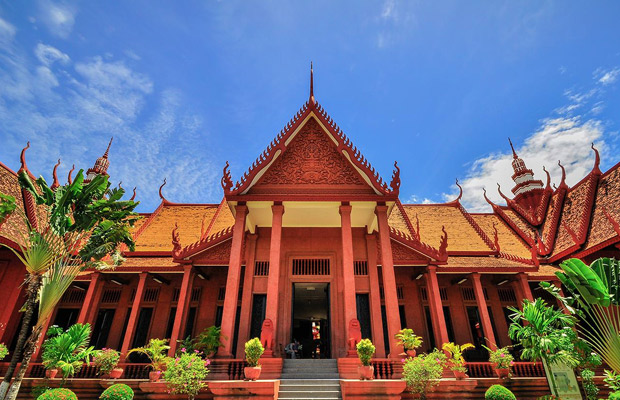